Drivers of Change: SDN and NFV

One of the main drivers of NFV is breaking apart functional networking blocks into their most focused pieces so that customers can pick and choose the ones that are most applicable to their services. That concept also seems to work for trade shows, as this focused show in Denver was well attended by industry professionals interested in focusing on the specific topic of SDN and NFV for communications service providers. In general, the talks and panels were well attended, informative, sometimes controversial, and worthwhile.

Perhaps the best way to summarize the information and conversations at the NFV and Carrier SDN show is to say that the fog is starting to lift on NFV and SDN, but that the weather is still cloudy. There were several real-world deployments of both SDN and NFV presented at the show by carriers, but much of the conversations in and around the convention served to emphasize that there is still a lot of confusion. Even NFV, which has a relatively strong business case and emerging infrastructure ran into a fogbank when discussing the state of MANO for NFV. In general, however, the future looks bright for both SDN and NFV – it is just not clear exactly what that future will look like when it arrives. 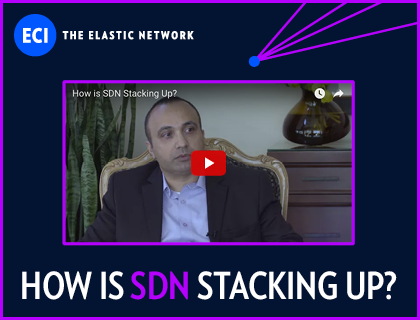 The strongest theme throughout the show is that customers will drive the implementation. Whereas in the past carriers have built products for use in bulk by many customers (e.g. MPLS private line services), going forward customers will demand many more options from their providers. SD-WAN, which allows customers to pick and choose providers as well as services, was a topic of discussion in several panels and presentations. Service chaining of multiple NFV functions in an on-demand basis also came up often. In general the concept of building a “Lego™ block” service in which the different functions are combined to create a wide variety of services was a recurring theme.

Repeatedly, both service providers and vendors stated that the services of the future are not yet conceived, as the flexibility of SDN and NFV will enable unique and innovative uses of the network based on customer needs. This is both the promise and the curse of programmability – more flexibility means more opportunity but also more complexity to be managed. And as we’ve seen before, most of the existing solutions presented were closed ecosystems that have not reached the goal of multi-vendor, best-of-breed optimization. For that, the industry still has a way to go.

Not only will customers drive the requirements for new services, but customers will want to control those new services themselves. The idea of customer portals ran throughout the show. The implementations may vary, but the results are the same: end customers want to have access to their services in ways that have not been possible in the past. Customers not only want to be able to instantiate different network functions (NFV), but also want to be able to control their bandwidth, routes, and service characteristics. This flexibility and responsiveness for provisioning of services is one of the primary drivers for SDN (the primary driver according to some of the numbers presented by analysts at the show), but opening that functionality up to customers can be scary for network providers. Despite the fear, it was generally agreed that customers will be demanding more control over their services in the future.

Perhaps the most interesting story of customers demanding control was from Equinix who told of customers using their network APIs in ways that they never expected. What was most remarkable was that Equinix embraced this concept and was very excited to see it happening, something that would have been unimaginable in a monopoly world where different types of phones were considered a violation of trust. Perhaps the Equinix case provides a preview of a future in which the network truly is a programmable platform whose uses are limited only by the imagination of its users. As the iPhone and Android platforms have aptly demonstrated, providing tools to customers can result in an ecosystem of useful applications that could not possibly be conceived by a monolithic company alone.

The role of analytics was considered critical enough to warrant at least one dedicated session, and for good reason. Without a good understanding of the network (via analytics), the other functionalities promised by SDN and NFV cannot work – or at least cannot work well. Analytics was included on at least one diagram as a third primary function underneath the orchestrator, alongside the SDN controller and NFV MANO. The amount of data generated in a software-defined and virtual network is staggering, and advanced analytic techniques will be necessary to manage the flood.

The major application shown for analytics was security – always a strong topic when discussing more open networks – but there were others including service assurance, network optimization, and billing. In each case, analytics were tied very tightly to automation. With more information available, automation will be required not only to analyze the data but also to use the data quickly. Automation of security response is particularly necessary as the number of anomalous events and potential threat signatures increases well beyond the ability of humans to absorb and react. Tools to analyze and react exist, but the data is growing faster than the capability of the back end to use it effectively. This gives a new twist to the concept of the Central Office as a Data Center – the CO will not just be storing and moving data, it will be generating data as well, requiring operators to think carefully about how to use that data effectively and locally.

The Deployments Are Real

Level 3 claimed to have over 75,000 elements under SDN control today. CenturyLink spoke of their deployed SD-WAN strategy and plan to move to a more data-center model. AT&T continues to tout their move to virtualization of their network. The innovations in SDN and NFV by Verizon were explained eloquently. 2016 seems to have been the year that NFV and SDN moved strongly into the deployment phase. Service agility, security, and network efficiency were promoted as drivers of the technology. Speakers noted that the successes of the data center should not be ignored by the telcos if they want to remain relevant. However, a dose of reality was provided by Walker and Associates, who noted that less than 5% their Tier 2 and Tier 3 customers are deploying the technology and the vast majority are either in the early education phase or have no interest at all in SDN or NFV. At this point in the evolution of programmable and virtualized networks, the technology is apparently only useful for those large companies who are able to devote significant resources towards its deployment and management. The industry is still a long way away from true plug-and-play programmable networking – which is a major contributor to the general sense of confusion mentioned at the start of this post.

Vendors are looking to the service providers for guidance and the service providers are looking to the vendors for innovation. There was general agreement that the standards bodies are too slow and that open source has taken the place of industry standards, a move that was cautiously embraced by service provider presenters. Perhaps the most interesting question of the show was about the ability of the many vendors in the SDN and NFV space to stay in business while the fog is being cleared. While some vendors have made progress with larger carriers, many other innovative players are still struggling through trials and waiting for the promise of a $XXX million market to materialize. Pure play SDN vendors and their investors have reason to worry as mass acceptance still seems to be eluding them.

I would be remiss if I did not mention the first panel of the show, the one in which I participated. The topic was “Building a Programmable Transport Architecture”, and the discussion was lively. My fellow participants from Level 3, Infinera, Netcracker, and Fujitsu and I – along with moderator Sterling Perrin of Heavy Reading – discussed the requirements for a truly dynamic transport architecture. Sterling’s introduction set the stage well with a description of multi-layer optimization as the primary driver for transport SDN and faster service deployment as the number one business driver.

The discussion on the panel ranged from the underlying hardware to the controller, with several different points of view represented and defended. Questions from the audience were especially good, including one question on the need for both an EMS and a Controller in the same network. Look to an upcoming blog post on that topic that will reiterate the answer given at the show and include a bit more detail.

Programmable transport is critical for an overall programmable network, and a control architecture that is able to understand the capabilities of Layer 0 through Layer 3 is a requirement. Applications presented on the panel included router bypass, improved service instantiation times, and network optimization. This is an interesting topic with a huge, as yet untapped, potential to change the way that networks are operated. For more information on this exciting topic, stay tuned to www.eci.com, as we are planning to release a comprehensive white paper on the topic in the next few weeks.

Dr. Wilkinson has deep experience in the telecommunications and technical startup fields, with positions held ranging from deeply technical systems engineering to entirely customer-focused marketing leads. A recognized public speaker and writer as well as a detail-oriented team leader, Dr. Wilkinson has been successful in companies ranging from Fortune 100 to small startups with less than 50 employees. Dr. Wilkinson's career includes significant interaction with major carriers in the United States as well as experience with rural telcos, utilities, and municipalities.